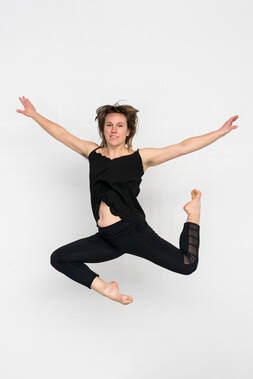 Stephanie Flanagan (she/her) grows nostalgic for her hometown, Junction city, Wisconsin. Upon graduating high school she traveled West and received her B.A. from the University of Minnesota's dance program in 2008. Shortly thereafter she performed for Time Track Productions for a season where she flew to the big apple and performed I Love You Tomorrow at the Dance Theater Workshop, NY, NY. Steph has also had the honor of performing in Choreographer's Evening at the Walker with artists Emily Michaels King Wigs and Dresses and Jessica Briggs Long Vanishing Spirals or something of that Nature. She joined AMP in 2013 and has the privilege to continue to work with them another season. 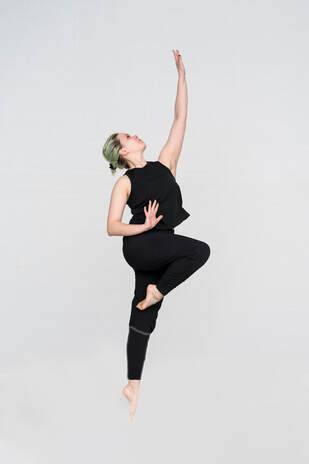 Laura K Johnson
Laura K Johnson  (she/her) is a performer, choreographer and instructor based in the Twin Cities. She is originally from Rosemount, MN where she was introduced to modern dance in high school and hasn’t looked back since. Laura is a 2016 graduate from Gustavus Adolphus College, where she received the Distinguished Dance Student Award and graduated Magna Cum Laude with a BA in Dance Honors. Laura is extremely passionate about dance because she believes it is essentially the art of being alive. As someone who struggles with being present in daily life, Laura finds herself the most content when she lets her mind and body sync together while dancing. Laura currently teaches modern technique at Ballet Royale Minnesota and Deuxmensions Dance Theatre & School during the school year, and recently produced a fringe show, Chapter 23, with some of her closest friends and fellow Gustavus grads. Laura is excited to see where her passion takes her in life and is absolutely thrilled to be dancing in her first season with AMP! 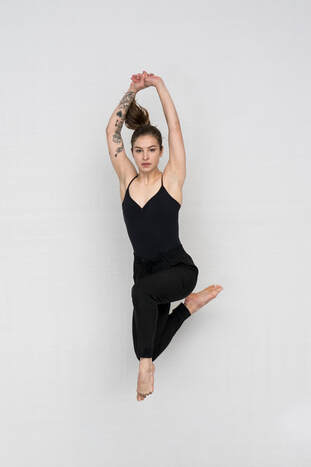 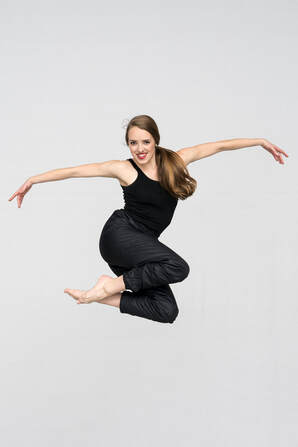 JULIA MOSER-HARDY
Julia Moser-Hardy (she/her) graduated from St. Olaf College with a Bachelors in Dance and Psychology, two fields that she feels see people as whole beings. Julia trained for 13 years at the Neta Barker School of Ballet in her hometown of Wayland, Massachusetts, and continued with Modern and Improvisation at St. Olaf College. Julia has had the opportunity to perform works choreographed by Stuart Pimsler Dance and Theater, Alexandra Bellar/Dances, SEVEN DANCE, and has danced in the Minnesota Fringe Festival with independent choreographers Jolene Konkel and Nora Anderson. Julia currently works at CREO Arts & Dance Conservatory as the Events Manager, and teaches at Prairie School of Dance. She is very excited to join AMP this year and get moving! 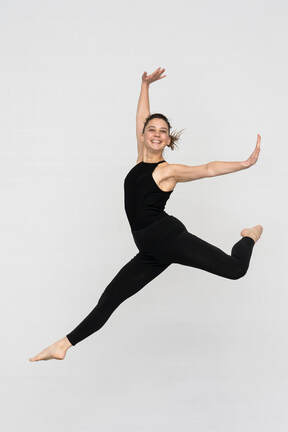 BRENNA MOSSER
Brenna Mosser (she/her) is a dance artist who seeks to illuminate the awe in her surroundings by sculpting falls, stumbles, and asymmetries gracefully. She spent two years in the Conservation Corps, where she faced the reality of climate change and has since dedicated her work to bringing awareness and justice to this crisis. She earned her bachelor’s in dance performance at the Trinity Laban Conservatoire of Music and Dance in London, UK. She supplemented her degree at le Centre national de la danse contemporaine in Angers, France where she earned the US equivalent of a BA in dance performance and in arts management. Brenna founded Analog Dance Works in 2019, a dance company whose mission is to explore the intersection between dance and science through choreographic works and roundtable discussions. Alongside AMP and her own practice, Brenna currently dances for Threads Dance Project and Bernadette Knaeble. 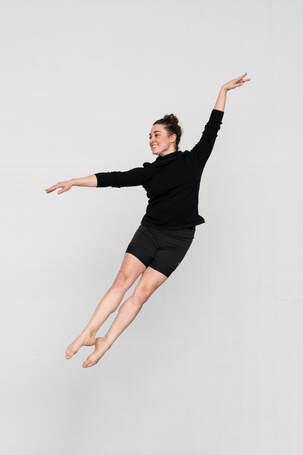 ERIN ROSS
Erin Ross ​(she/her) was born into a family of musicians.  She began studying dance at Ballet Arts Minnesota and Minnesota Dance Theater. At age 16, she became an Apprentice with the Minnesota Dance theater, under the direction of Lise Houlton, where she performed Nutcracker Fantasy, Swingin’ Nutcracker, Rite of Spring, Carnival of the Animals and Swan Lake. She spent summers at Interlochen Arts Camp, where she received the Fine Arts Award for Ballet, at ABT and Complexions in New York, Houston Ballet and the Dawson/Wallace Dance Project Professional Workshop in Denver. In 2012 she graduated from the Alonzo King Lines Training Program in San Francisco, and soon after moved to Miami to dance with the Dance Now Ensemble for a season. Since returning to the Twin Cities, Erin has danced at the 2013 Fringe Festival in Helen Hatch’s There is no Myth project, and is also pursuing a singing/ songwriting career. Her vocal work has been heard on ads for Minnesota Lottery, Khols, the Gap and her songs have been featured on MPR The Current. She works as an instructor at the Foss Swim School and is thrilled to be joining Alternative Motion Project for her third season. 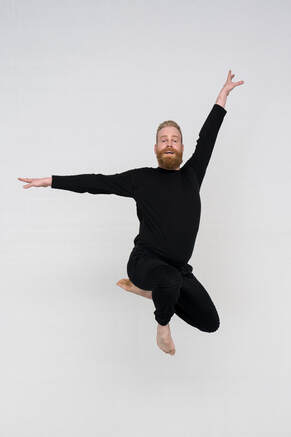 JESSE SCHMITZ-BOYD
Jesse Schmitz-Boyd (he/him, Social Media Manager) is a Twin Cities based performer, choreographer and arts educator. This is Jesse's 6th season with Alternative Motion Project.  Jesse has also performed locally with Off-Leash Area at the Cowles Center and throughout Minnesota as a part of the company’s Neighborhood Garage Tour. While at the University of Wisconsin- Stevens Point he danced feature roles in Susan Marshall & Company’s Other Stories and Billy Sigenfeld’s God of Dirt. Upon graduation Jesse toured the Midwest with Chicago based RE| Dance Group performing Michael Estanich’s The Lonely Visitors. Jesse’s choreography has been presented at The Minnesota Fringe Festival, Rochester Ensemble of Dance (R.E.D.), Zenon Dance Zone, The Ritz Theatre, and Movement Arts Day (Eau Claire, WI).  Last August he presented 35 Different Angles From Which to Hate Yourself at the Minnesota Fringe Festival with his newly formed performance group Rogue & Rabble Dance. The Start Tribune said it was one of the ten must see shows of the 2017 Fringe. Jesse teaches dance and movement to children and adults at Zenon Dance Company & School, Children’s Theater Company, Ballare Teatro, and Allegro School of Dance & Music. When not dancing Jesse can be found enjoying science fiction television, eating gummy worms or playing pinball. Jesse would like to thank his partner David for his support and love. 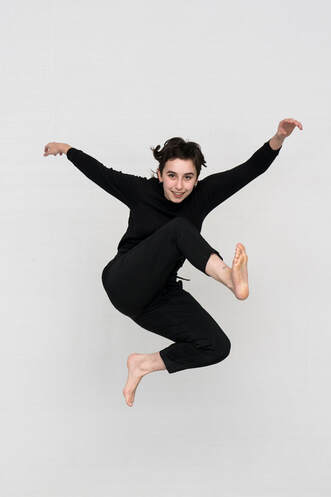 ADDIE SMITH
Addie Smith (they/them) began their dance training in Los Angeles where they attended Los Angeles County High School for the Arts, concentrating in dance. In 2017, Addie graduated University of California, Santa Cruz with a BA in Theater Arts and Dance; collaborating, choreographing, and directing new works both professionally and within the university. Throughout their career, Addie has performed with companies including Shift the Grid Dance Collective, Cid Pearlman Performance Project, and Gerald Casel Dance. Since moving to the Twin Cities in 2017, Addie has performed with Loom Lab and currently dances with Crash Dance Productions. This is their first season with Alternative Motion Project. 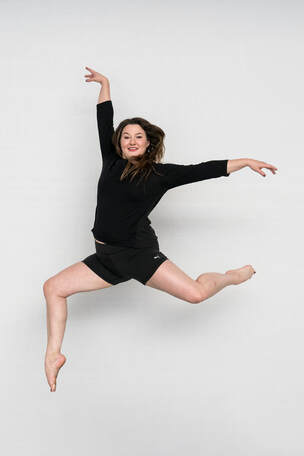 BRIDGETT TEGEN
Bridgett Tegen began her professional dance training at the University of Wisconsin-Milwaukee where she holds a BFA in Dance and a Minor in Women's studies with Honors. In Milwaukee, she performed with Gerald Casel (Stephen Petronio Company) and the site-specific company, Wild Space Dance.  Since returning to Minneapolis, Bridgett has apprenticed with ARENA Dances in addition to participating in miscellaneous projects with Paula Mann, Mad King Thomas and BodyCartography. Bridgett is grateful to be performing in a thriving dance community and is excited to be back on stage with the AMP for her fourth season!
​ 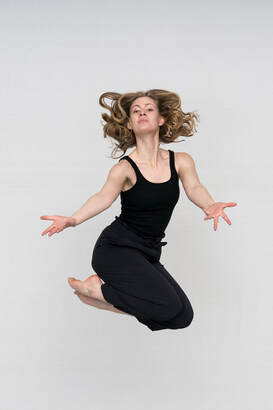 LAUREN VANCHINA
Lauren Vanchina received her BA in Dance and Psychology from the University of Iowa in 2014. While at Iowa, Lauren immersed herself in several aspects of dance study: she studied dance history and theory as an Iowa Center for Research by Undergraduates Fellow under the guidance of dance scholar Rebekah Kowal, taught the kiddos how to shuffle with the University of Iowa Youth Ballet, and performed across Iowa as a member of Dancers in Company. She has performed in works by Charlotte Adams, Gabriel Anderson, Jennifer Kayle, Alan Sener, Lisa Gonzales, Ester Baker-Tarpaga, and Olivier Tarpaga. Lauren interned with Dance Magazine in the summer of 2013, and her contributions to the magazine appear in several issues from late that year.  Since moving to Minneapolis, Lauren has performed work by Joanna Lees, Kristin Howe, Jesse-Schimtz Boyd, and Penny Freeh. Currently, she balances (or tries to balance) dance with pursuing an MSW at the University of Minnesota. She is thrilled to be a part of AMP!